All neutron stars are magnetic, but some are more magnetic than others. The latter, so-called magnetars, are the strongest magnets in the Universe. The reason for their exceptionally large magnetic field is most probably that they formed in supernovae of already highly magnetized stars. But how do these massive stars acquire their large magnetic field? A team of astrophysicists from Germany and the UK may now have solved the more than 70-year-old conundrum of the origin of strong magnetic fields in massive stars. With the help of large computer simulations, they developed a model which shows that these can be formed in stellar mergers. The results were published in the scientific journal Nature.

Our Universe is threaded by magnetic fields. “We know that the Sun has a turbulent envelope in which its magnetic field is continuously generated. But more massive stars do not have such an envelope. Still, about 10 percent have a strong, large-scale surface magnetic field whose origin has eluded us since their discovery in 1947,” says Fabian Schneider from Heidelberg University in Germany, first author of the study. It is these stars that astronomers believe to form highly magnetic neutron stars when they explode in supernovae.

“Already over a decade ago, it was suggested that strong magnetic fields might be produced when two stars collide”, says Sebastian Ohlmann from the Max Planck Society in Garching, Germany. “But up until now, we had not been able to test this hypothesis, because we did not have the necessary computational tools.” This time, the team utilised the novel AREPO code and ran it on computing clusters of the Heidelberg Institute for Theoretical Studies (HITS). They showed that a strong magnetic field is indeed produced thanks to the strong shear and the large turbulence present in the merger of two stars. Stellar mergers occur frequently, and it is thought that about 10 percent of all massive stars in the Milky Way are the products of stellar mergers – a good match with the occurrence rate of magnetic stars.

When stars merge, they appear younger than they really are. This phenomenon is well known, and such stars are called blue stragglers. “In 2016, we realised that the magnetic star Tau Scorpii (τ Sco) is a blue straggler and could show that, if τ Sco was a merger product, it would explain its anomalously young age,” remembers Philipp Podsiadlowski from the University of Oxford, UK. “Back then, we suggested that this star may also have obtained its strong magnetic field in the merger process and our new simulations demonstrate exactly this.”

At the end of its life, τ Sco will explode in a supernova when its core collapses and most probably leave behind a highly magnetized neutron star. “These magnetars are thought to have the strongest magnetic fields in the Universe – up to one hundred million times stronger than the strongest magnetic field ever produced by humans,“ says Friedrich Röpke from HITS. “Our simulations show that the generated magnetic field could be sufficient to explain the exceptionally strong magnetic fields inferred to exist in magnetars,” adds Fabian Schneider. “It makes our model a promising channel to explain the origin of such extremely strong magnetic fields. It is great to see that this idea now seems to work out so beautifully.”

The original science publication in Nature (DOI 10.1038/s41586-019-1621-5), “Stellar mergers as the origin of magnetic massive stars” by Fabian Schneider, Sebastian Ohlmann, Philipp Podsiadlowski,
Friedrich Röpke, Steven Balbus, Rüdiger Pakmor, and Volker
Springel, can be found here: https://www.nature.com/articles/s41586-019-1621-5. If you want to have a look at the paper, you can read it via this link: https://rdcu.be/bTOtS

I have also written a “Behind the paper” article for the Nature Research Communities which can be found here.

The paper is accompanied by press/news releases from Heidelberg University, Oxford University, the Heidelberg Institute for Theoretical Studies and the Max Planck Society.

Information about the massive binary star VFTS 352 with the surfaces of the two stars already touching each other and heading for their merger may be found in this press release. Observations of two stellar mergers in the Milky Way, V838 Mon and V1309 Sco, can be found here and here.

Images of the merger simulation Birth of a magnetic star. The two snapshots of a simulation shown here mark the birth of a magnetic star such as Tau Scorpii. The image is a cut through the orbital plane where the colouring indicates the strength of the magnetic field and the hatching represents its field lines. Image credits: Ohlmann/Schneider/Röpke

Movies of the merger simulation

The first movie illustrates the evolution of the absolute magnetic field strength in the orbital plane of the merger while the second movie shows the gas density (ligther colours are for stronger magnetic fields and denser gases). 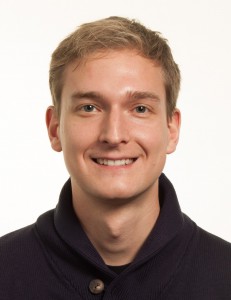 Welcome to my homepage! I am a Gliese Fellow at the Zentrum für Astronomie der Universität Heidelberg. Before that I was a Hintze Research Fellow at the University of Oxford and a postdoctoral research fellow at Christ Church College, Oxford. My main research interests are the lives and deaths of massive stars.