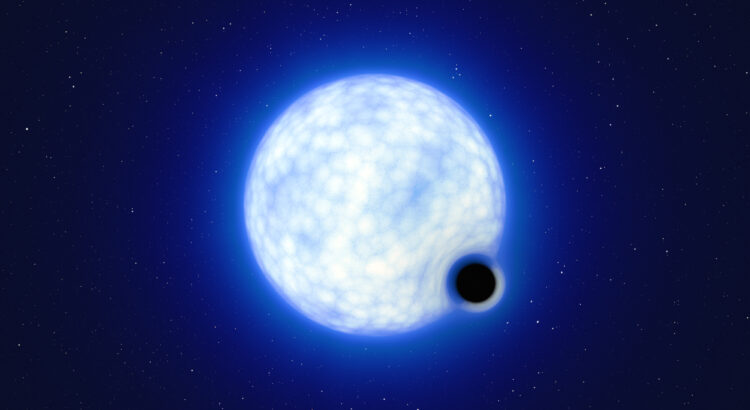 An international research team with the participation of HITS discovered a “dormant” black hole in a binary-star system outside our galaxy. These black holes are very difficult to find because they do not emit X-ray radiation. Analysing data from six years of observations with the European Southern Observatory’s (ESO) Very Large Telescope (VLT), the team studied nearly 1,000 stars until they found the dormant black hole. The results have now been published in the journal “Nature Astronomy”.

They call themselves the “Black Hole Police”, and they aim to discover and study black holes in the universe: a group of astrophysicists from seven countries. After years of detective work, they have identified a so-called “dormant” stellar-mass black hole located in our neighbouring galaxy, the Large Magellanic Cloud. The team also found that the companion star that gave rise to the black hole disappeared without evidence of a strong supernova explosion. The discovery is based on six years of observations with the European Southern Observatory’s (ESO) Very Large Telescope (VLT) and has now been published in the journal “Nature Astronomy”.

“We have found a ‘needle in a haystack’”, says first author Tomar Shenar (University of Amsterdam), “VFTS 243 is the first ‘dormant’ stellar-mass black hole discovered outside our galaxy.” It has at least nine times the mass of our Sun and orbits a hot, blue star with 25 times the mass of the Sun. To find it, the researchers studied nearly 1,000 massive stars in the Tarantula Nebula of the Large Magellanic Cloud.

Stellar-mass black holes form when massive stars collapse under their own gravity at the end of their lives. If this collapsing star is in a binary system, the black hole will then be orbiting a luminous companion star. Such black holes often accrete material from their companion and can emit powerful X-rays, but a “dormant” black hole does not. Therefore, it is very difficult to find them. Astronomers suspect that there are many dormant black holes, maybe a few per cent of massive stars have such invisible companions.

Also involved in the study was HITS group leader Fabian Schneider (Stellar Evolution Theory group), an international expert on stellar evolution and binary systems. When massive stars explode in supernovae, their cores collapse and can forge neutron stars – a form of ultracompact matter. “In most cases, these neutron stars receive a kick of several hundreds of kilometres per second and are shot away from their explosion site into interstellar space”, explains Fabian Schneider. “The black hole in VFTS 243 did not receive such a kick, which suggests that its progenitor star directly collapsed into a black hole without signs of a strong supernova explosion.” This finding will also help understand the formation histories of the many black-hole mergers that are nowadays observed thanks to gravitational-wave astronomy.

The team utilized observations covering about six years: they consist of data from the VLT FLAMES Tarantula Survey (VFTS; led by Chris Evans, United Kingdom Astronomy Technology Centre, STFC, Royal Observatory, Edinburgh; now at the European Space Agency) obtained from 2008 and 2009, and additional data from the Tarantula Massive Binary Monitoring programme (TMBM; led by Hugues Sana, KU Leuven), obtained between 2012 and 2014. Together with other researchers, they just met in June at HITS for a workshop to discuss new avenues.

For more information, pictures and videos see the ESO press release at https://www.eso.org/public/news/eso2210/ and the HITS news at https://www.h-its.org/2022/07/19/set-black-hole/.