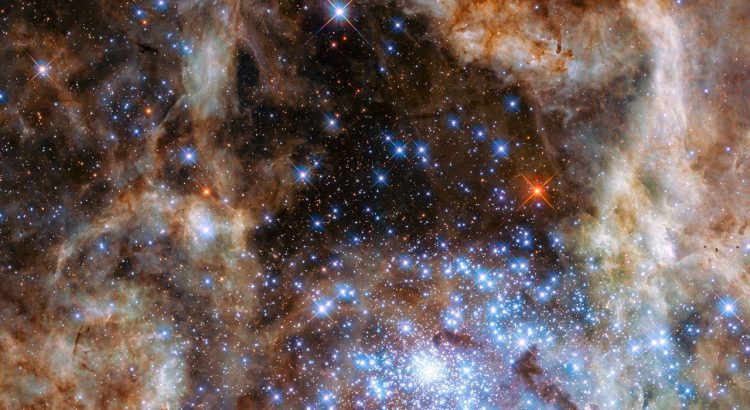 30 Doradus, once thought to be the 30th brightest star in the constellation Doradus in the southern hemisphere, is now known to be a massive star-forming region harbouring several record-holding objects such as the fastest spinning and most massive stars known. Sometimes also called the Tarantula nebula, 30 Dor is located in our neighbouring galaxy, the Large Magellanic Cloud. At its heart lies the massive and young star cluster R136.

We have now dissected this star cluster using ultraviolet capabilities of the Space Telescope Imaging Spectrograph (STIS) aboard the Hubble space craft, finding nine stars being at least 100 times more massive than our Sun. Together, these nine stars outshine our Sun by a factor of 30 million and totally dominate the light and feedback of stars in this region. Several of them exceed the 150 solar mass limit once thought to be the maximum birth mass of stars. Some of these behemoths may have been produced by merging lower mass stars but the sheer number of these monsters makes it unlikely that all of them have such an origin. It therefore seems that nature has found ways to form such objects, challenging our theories of star formation.

To learn more about these fascinating stars, the following resources may be helpful: